The aerospace sector is at a “critical juncture” in the march towards a significant, disruptive technological shift, say panellists at an aerospace roundtable, who also stress that sustainability will underpin these changes.

At the wide-ranging webinar, organised by FlightGlobal in the lead-up to the Singapore Airshow, the five panellists spoke about how the Asia-Pacific is fast becoming a hotbed for innovation and technology, including urban air mobility solutions and sustainable aviation. 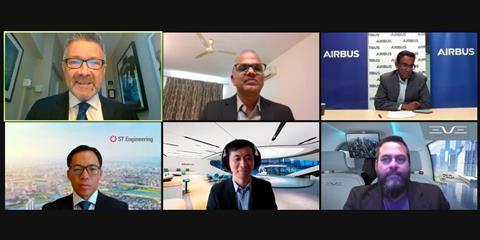 GE’s Reddy, when asked whether he felt there would be a step change in the industry over the next 10 years, says the sector is at a “critical juncture”.

Pointing at recent trends in engine design and innovation — including electrification and unducted turbofans — he says: “It is the most important, most accelerated transition that ever happened in history…If you see the combination of all these, I think the next 10-20 years is going to be extremely different from what there was in the last 30-40 years.”

Concurring, Airbus’s Stanley adds: “[The] momentum has really taken off quite a bit in terms of multiple technology factors.”

He adds: “If we look at today’s technologies, of course, decarbonisation is what’s on everyone’s mind, and it’s accelerating at a very fast pace…But the question is, what more can we do? It’s not just either/or, it’s a combination of things.”

“We are seeing confluence of many factors coming together, including digitalisation, sustainability, propulsion, technology, electrification, and even Covid-19 has contributed to, you know, as moving faster ahead in many of these areas,” says Lam.

The panellists also agree that sustainability will play a key role in how these innovative technologies will move forward.

Short-term steps towards achieving sustainability include using sustainable aviation fuels, as well as making use of digital technologies for better flight navigation and air traffic control, to reduce emissions.

In the longer term, Airbus’s Stanley says zero-emission aircraft — like the airframer’s in-development Zero E hydrogen-powered aircraft — will be a way forward for air travel.

On the services side, ST Engineering’s Lam says sustainability has to run in both products and operational processes.

He adds: “From an MRO perspective, when we look at it…we figured out that we’ve been doing sustainability for the longest time, because we’ve been refurbishing, salvaging, repairing and maintaining aircraft and systems on board aircraft, so that they don’t get junked.

One example is the company’s successful passenger-to-freighter conversion programme, which Lam says is “giving a new lease of life to retired as an aircraft that would otherwise have been scrapped”.