The Mac comes with apps for writing notes, letters, and even books, but take the time to look further and there are superb writing apps for every aspect of writing.

You do already have Pages on your Mac — and on your iPhone and iPad too — and it is a world-class word processor. Pages tends to hide its features away, preferring to make it look simple and basic, but it is powerful.

Then, too, if you had to bet on which other word processor was on a given Mac, the smart money would be on Microsoft Word. It’s still a titan in the industry, though it’s fallen a long way since it was both ubiquitous with, and essential for, all writers.

Pages is free and Word is now a subscription app that costs from $70 per year. It is still possible to buy Word outright, and that starts with what’s called a Home edition for $150.

Before you spend that, though, take a look at the specialist writing tools which make the Mac extraordinarily useful for writers.

OmniOutliner is, as the name stresses, an outlining tool. It’s also very good at outlining everything from novels to non-fiction tomes. However, it’s really rather more than that, as its core strength is in expanding ideas.

Whether your idea is for a story, or your boss has thrown five events at you to create, OmniOutliner lets you jot down any thought. Dump every idea you’ve got into it and then you can arrange, massage, grow it all until you’ve got a complete, working project. 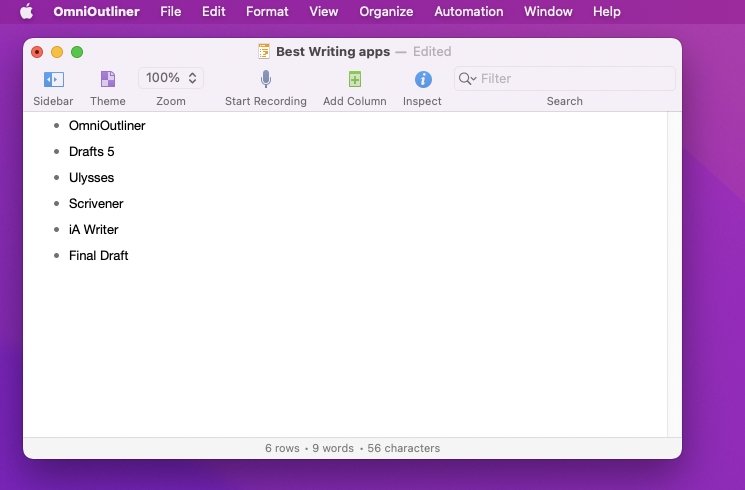 OmniOutliner is available on both Mac and iOS, beginning with an Essentials version that costs $20 on either platform.

On the surface, Drafts 5 is as basic a notetaking app as you can get — but that’s specifically to make using it quick. Whether you’re just learning the app or have used it for years, you can get starting writing fast.

Then while that could be all you need from Drafts 5, you also get the ability to decide what to do with text once you’ve written it. Get it written in Drafts, then you can tell the app to send it as an email, to post as a blog, or any of countless actions that are available. 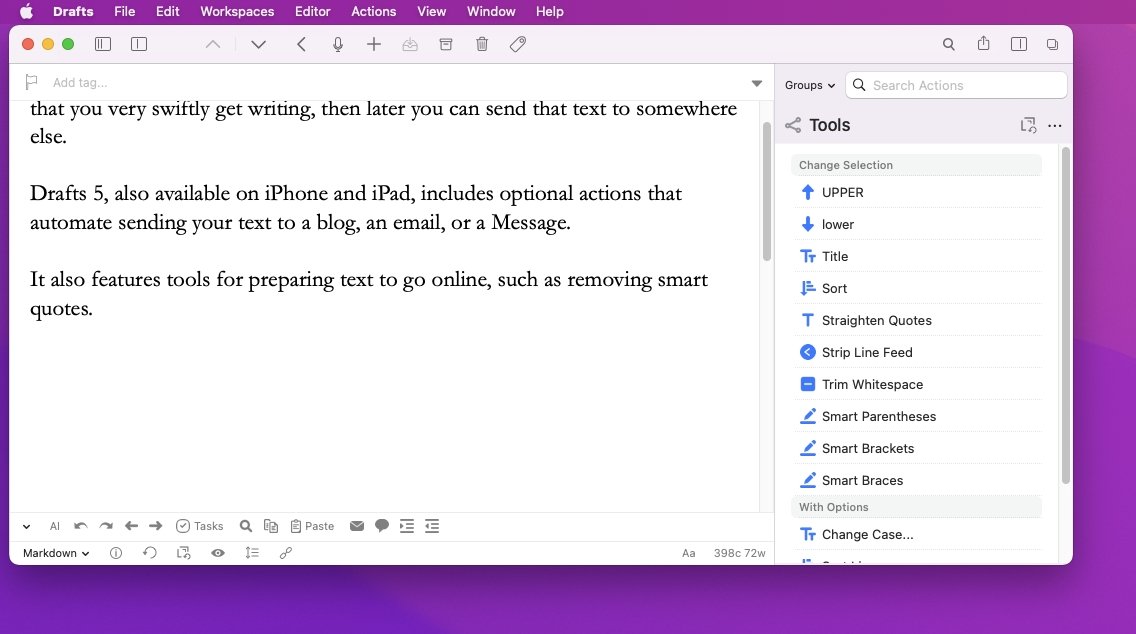 Drafts 5 is free to download and use, but those actions require a Drafts Pro subscription, which costs $20 per year.

Ulysses is also an apparently simple text editor that hides a lot of power. In this case, the strength is in how it’s as much a writing environment as a basic word processor.

Rather than having documents that you create and then have to manage yourself, Ulysses treats everything you write as one document. It’s all divided into books and chapters and topics as you need, but open Ulysses and you have immediate access to everything you’re writing. 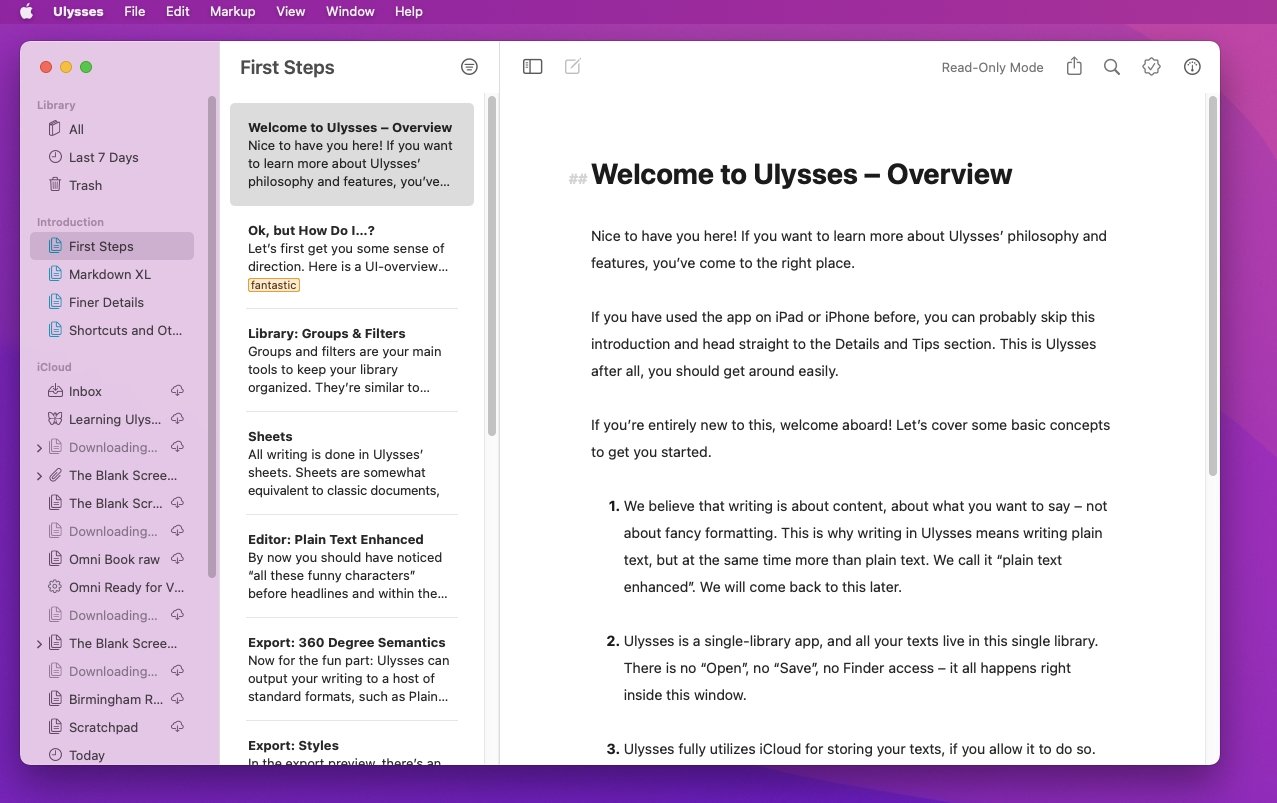 Ulysses is a subscription app that costs $50 per year for use across Mac, iPhone and iPad.

As a word processor, Scrivener is simply enjoyable to write in. Then as you write more, its ability to organize your work — and let you rearrange whole chapters — is far better than that of Pages or Word.

You’re able to see, for instance, just chapters 17 and 33 of your novel. You can see those side by side, or one after another. You can set writing targets for the book, or just for this session.

Then it’s ability to take all of your writing and output it ready for book printing, ready for sending to publishers, is famous. And so is how you can store any research — notes, drafts, weblinks, PDFs, audio, video, and more — in your book. 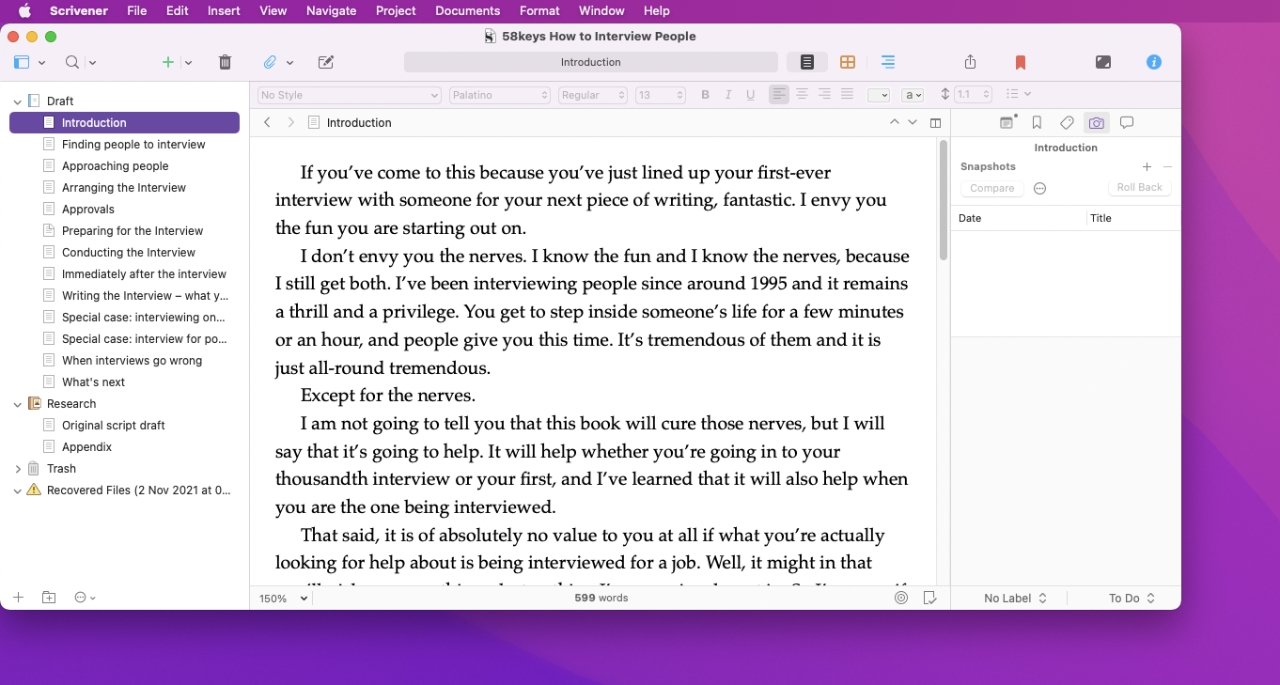 Have quick access to everything you need to refer to, yet also have none of that be shown to your readers.

Long before the Mac introduced Focus Mode, iA Writer had its own version. In iA Writer, if you choose, you can have all of your writing fade to grey — except the sentence you’re working on right now.

Then, again optionally, iA Writer can highlight adjectives, verbs and so on, surfacing your use or over-use of them. It’s about giving you the ability to see the wood for the trees, except when it’s trees you want to see.

The iA Writer app is built around Markdown, meaning that formatting and styles are done with text commands right in the text.

Screenwriting app Final Draft has more competitors now, but it remains a leading choice for film and television writers. It’s a word processing app, and can be used for letters and prose, but its strength is in how it automates screenwriting formats. 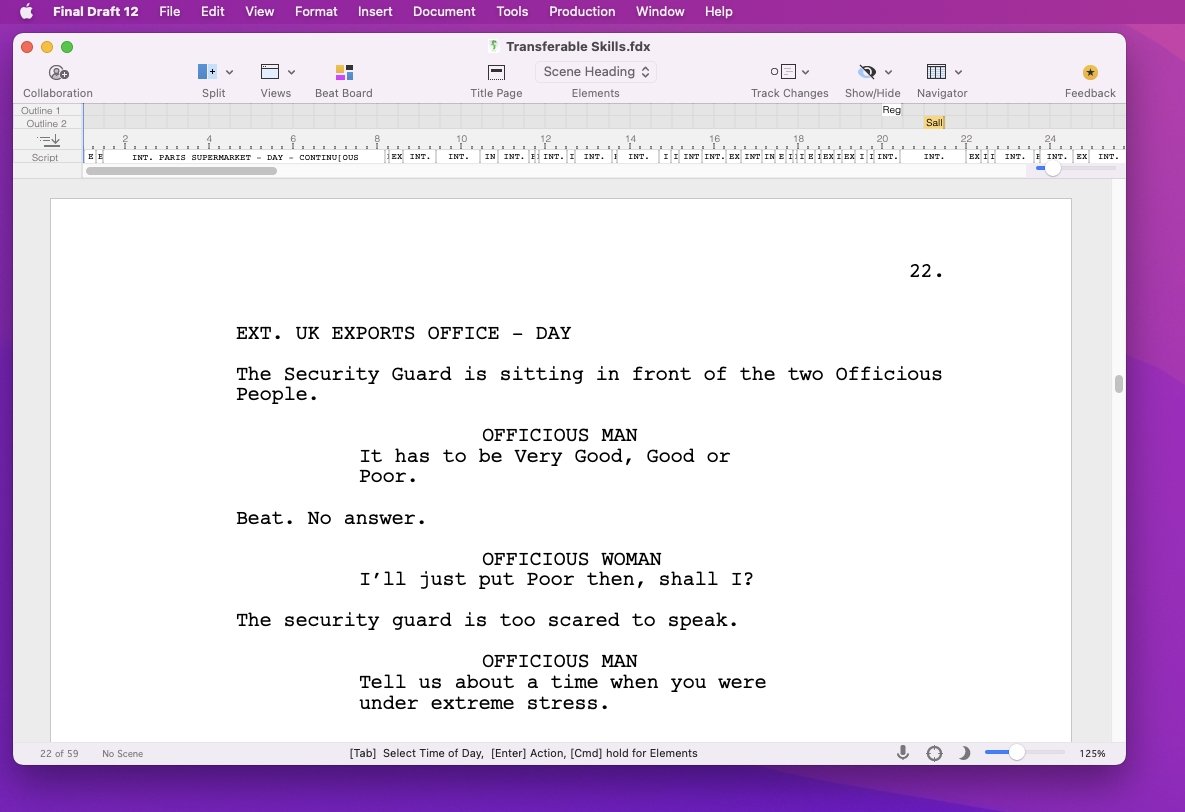 Scripts are blueprints for a dozen or more different departments in a film’s production, and to serve all their needs, very particular formats and page layouts have been developed over decades. Final Draft automatically formats as you write and it means you can concentrate on your story, characters, and dialog.

Final Draft normally costs $249.99, direct from the developer. Note, though, that there are regularly sales throughout the year.

No one writing app covers everything that a writer will need. As well as major apps like Final Draft, and Pages, there are also many utilities that writers can benefit from.

Check out the subscription service Setapp which includes some major titles such as Ulysses, but then also utilities such as Mars Edit for blogging.

A subscription to Setapp usually costs from $9.99 per month, but for a limited time an annual license can be had for 36% off through the AppleInsider store.