What does it take to bring about an online revolution? As 2022 looms, a new movement, under the banner of Web3, has become one of the most discussed — and least understood — forces in tech. But it’s not at all clear yet what practical problems it will solve to become part of everyday life.

Each iteration of the web has rested on new technical capabilities. With the first version, it was the ability to browse between static web pages. With Web 2.0, the web became a more interactive, real-time medium and users themselves became the content.

These developments, built on the internet’s open protocols, were radical enough to support new forms of mass online behaviour. So what of Web3’s supposed shift to a more decentralised online world?

Its core innovation rests on the distributed consensus made possible by blockchains — the ability to reach binding agreements with complete strangers, without needing to rely on any intermediary or central authority. Imagine if large groups of people could spontaneously transact: what new wonders of human co-ordination might be possible? The crypto boom has applied this idea to money, but the full promise of Web3 rests on using the same technical underpinnings to intermediate many other forms of human interaction.

The rhetoric behind this certainly matches the mood of the times, with its distrust of elites and institutional authority. Also, it seems to present an easy answer to the power of Big Tech: You, too, can take back control of your data and your online life, while also getting a chance to share in Big Tech’s insane profits.

It’s an alluring pitch. But behind the rhetoric of decentralisation, it’s not clear what practical applications would actually draw people away from the current online services that remain hugely popular.

The first eruptions have been in decentralised finance, where individuals transact without an intermediary, and in digital collectibles known as NFTs. These hardly point the way to other uses. Much of the attraction of the former rests on circumventing financial regulation, while the latter has been the excuse for a speculative mania. 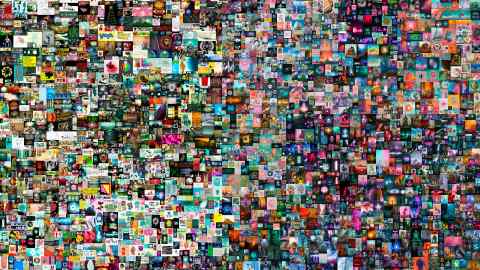 There are other reasons to be wary. Rip away the institutional supports that frame mass human interaction and what is left? As some regulators have warned, the current system for regulating financial markets has relied on oversight of banks, brokers and market authorities.

It’s true that regulators have yet to find a way to constrain today’s giant technology companies. But would Web3’s promise — of leaving everything to rules baked into software, assured by supposedly bulletproof cryptography — leave ordinary people feeling any more confident their interests are being looked after?

Using new digital currencies to grease the wheels of this decentralised online world — a process known as tokenisation — would have other effects. It would turn online activities into markets, where every interaction is instantly monetised. As such, it would represent a form of hyper-financialisation with unpredictable effects on the way people behave online.

This might at least seem like a fair starting point for building a more equitable system, one that puts individuals in control. But the outcomes of revolutions usually don’t match the launch rhetoric.

By-passing the old intermediaries usually opens the way to a new set of intermediaries — as the first Web did. The blockchain dream has its limits. It isn’t possible to put everything on to an open, distributed database where all the nodes can be instantly updated to reflect each new set of transactions. That leaves plenty of room for new intermediaries to grow up around the edges, translating the promise into practical services.

For the latest news and views on fintech from the FT’s network of correspondents around the world, sign up to our weekly newsletter #fintechFT

The wild speculation that has accompanied the crypto boom is also a reminder that an orderly sharing of the profits is unlikely.

This doesn’t mean that the central technology behind Web3 doesn’t have radical potential, or that — like the first dotcom boom — today’s speculative mania won’t seed the next important tech businesses. So far, though, advocates of the new technology still struggle with one overriding challenge: to come up with practical applications that can match the everyday aspirations of millions of users. Silicon Valley operates on the principle that if you throw enough engineering brainpower and capital at a problem, a better way will emerge. We’ll see. Web revolutions have been messy in the past. This one looks like it will be messier than most.

Letter in response to this article: